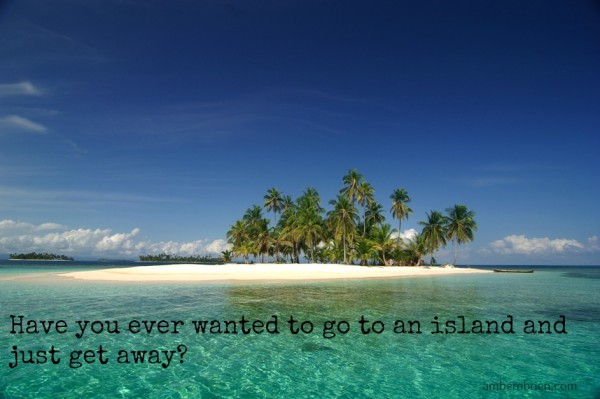 Locked in our small powder room, I cling to the phone as my three children knock on the door.
“Mom, she hit me!”  They whine.
“Jacob won’t let me use the computer.”
My husband chimes in with “Amber, have you seen my shoes?”
Ignoring the interruptions I ask my friend on the line, “Have you ever wanted to go to an island and just get away?” 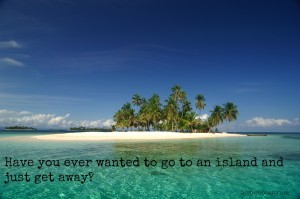 So begins one of the many videos I have submitted to the reality show, Survivor. If you think I am crazy for wanting to go to a remote location for thirty-nine days and live off the land, eat bugs, wear no makeup (yikes!) and put myself in a situation of possible ridicule and failure, I don’t blame you. I have wondered the same thing time and time again.

The producers must have thought the same thing after seeing the second part of the video we submitted.  My ‘director’ husband created a scene in which I suddenly emerge out of blue sparkling water similar to the scene with Bo Derek in the movie 10. After my exaggerated surprise at being in a beautiful tropical scene, I start to walk toward the shore complete with beaded hair. Boom! My three children run into me and try to knock me down.  As I seek to upright myself I laughingly state, “Make that without children” correcting my fantasy wish.

After some reflection, I realize that the contrast between Bo Derek and me was probably too much for the judges to handle.  I still wonder if they laughed out loud or simply moved their fingers like I was crazy.

Yes, I confess to submitting videos and applications to be on the show. The poor video judges must have held their ears as I sang the Gilligan’s Island theme song complete with new words, “Just sit right back and you’ll hear a tale, the tale of a homeschool mom…” While the words might have been clever, my singing voice has never been one of my assets.  Nevertheless, creating the videos was always great family fun.

In contrast to the light-hearted videos, the application process forced me to dig deep. One question in particular made me stop and ponder more than the others:

“Who is your hero and why?”

Quickly, I realized that my hero was not a former winner of their show or a famous actor on television.  Instead, I thought of all the unrecognized people serving and caring for God’s people.  My heroes included: parents who care for a terminally ill child or parent, an abused woman who allows her anger and hurt to dissolve into forgiveness, a husband who turns away from temptation, a woman who regrets a past decision and now helps others from making the same mistake, a family who says yes to one more child, a couple who seeks counseling to reconcile a dying marriage, an addict who throws away his addiction because it is destroying his family, the single parent who must play the part of both mom and dad…  the list goes on and on. These people give and forgive when no camera crews are watching. These true survivors endure hardship and heartache often lasting much more thirty-nine days. No odds of winning a million dollars or being a guest on The David Letterman Show. They are not ‘models’ but they model for me who I hope to become.

Despite our family’s best efforts, I never received a call to come and audition. As time went on though, my desire to try again continued. I tried to rationalize and justify my desires. Since the sociology of putting such diverse people in this situation appealed to me, I reasoned they needed a Christian homeschooling mom on the show. I mean, how many homeschooling moms have been on Survivor?  Zero! Of Course, it’s questionable how many have actually applied. I also desired justice, and hated to see someone who lied and cheated win.  I thought perhaps I could show them that the best strategy is to be trustworthy. Perhaps my mission field would consist of millions of viewers.

It was then that I recalled Mother Teresa’s famous saying, “Do small things with great love.”  I was grounded once again as I thought of all the unsung heroes listed above.

I would pray “Lord, take this desire away if it is not of you.”  I would also ask, “Is this just me?”  No, this drive seemed not to be a push from within but a pull from beyond.

Then it happened. My desire to get away became a reality when I went on a silent women’s retreat with a friend. During the 48 hours I began to refocus.

“What is reality?” The priest asked.

“Reality is the love of Christ.”

We were reminded that we are on this earth such a short time in relation to eternity, and we are all called to make the most of the time we have to know, love, and serve Him. My silent retreat was away from the busyness of the day, and far from any Hollywood cameras. What a wonderful and refreshing weekend! I felt spoiled as I enjoyed the delicious food (no bugs) and listened in the peace and quiet. I will never forget how the priest began the first meditation.

“You think that you worked hard to scheme and put together this weekend, but Jesus for all of eternity has been planning this time to be with you.”

Yes, He had been planning the weekend all along and in it I found once again the reality of His love for me.

After a short time however, I realized that this time away was not all going to be a romantic bed of roses.

Sometimes God loves us so much that He convicts of something that is harming our body or a relationship with others or with God.

God convicted me of something that culturally most Christians would not consider a sin.   Slowly God had been bringing others in my path who were walking counter-cultural and I started questioning this choice I was making. Out of obedience I finally surrendered this crutch and realized that I needed to trust God more. As a priest said who walked by and saw my many tears. “God is pruning you, to make you stronger.” When I arrived home I still had work to do to fully to free of this sin, but the relief and joy of being releasing from this hindrance was the best gift that God could ever give. As Jesus proclaimed in John 8: 34

“Amen, amen, I say to you, everyone who commits sin is a slave to sin.  A slave does not remain in a household forever, but a son always remains.  So if the son frees you, then you will truly be free.”

Jesus Christ is the truth. He came so that we could see the reality of how sin slowly destroys our relationships. Sin poisons our bodies and souls.

The only way we can know Truth is to spend time in the presence of Jesus. For He is the way, the truth and the life.

Randy Alcorn explains, “Jesus is the source of all truth, the embodiment of truth and therefore the reference point of evaluating all truth-claims.”

The more time we spend in His presence and reading His word, the more we can know what “truth is” and to be protected from the lies of the enemy.

How mind blowing is this: The King of Kings wants to sit and chat with you. You don’t need to go to a deserted Island or even a weekend away. I suggest  sitting with a pen and paper and start reading from the Gospel of John.  A  10 minute retreat each morning will change you from the inside out.

You don’t need to escape your life, you need to allow the eyes of your heart to be opened to the Reality of God’s deep love for you.