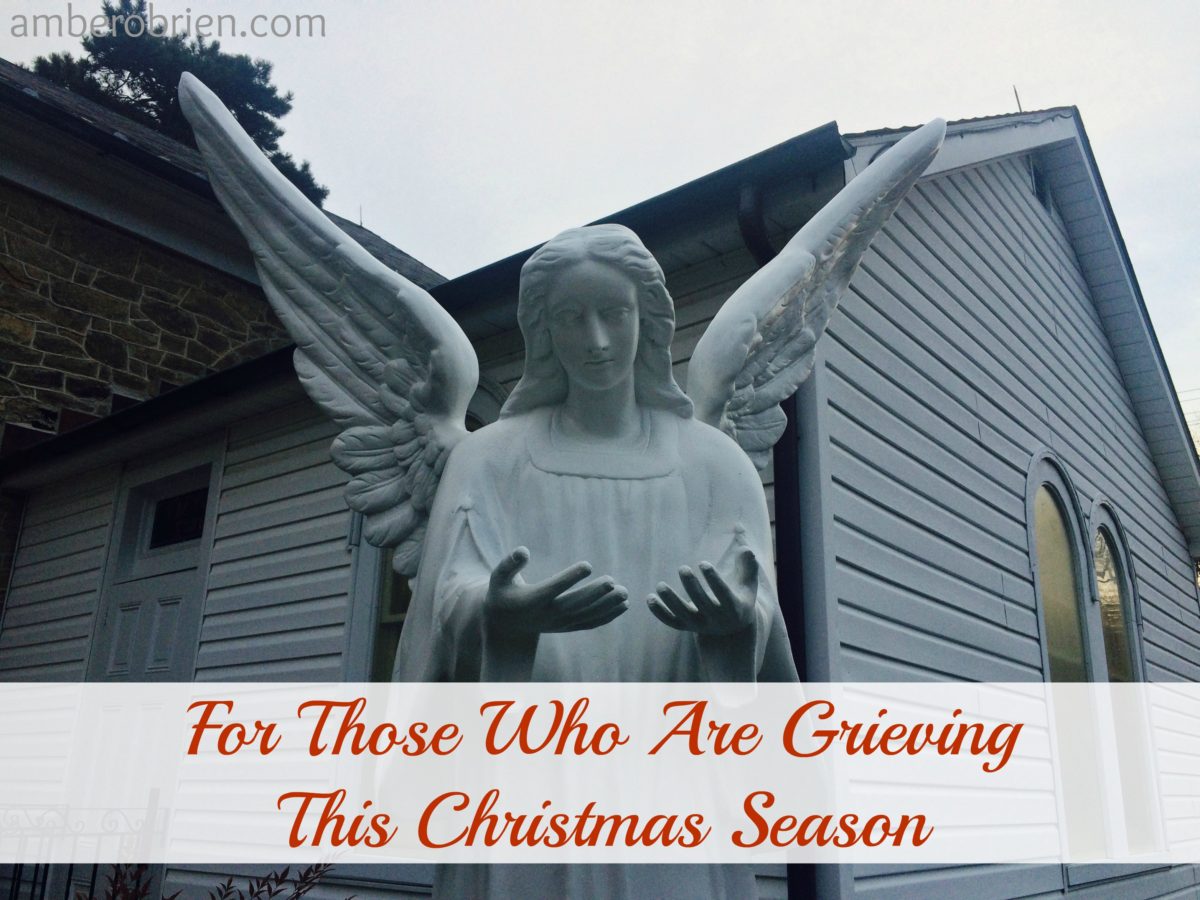 My experienced friends warned me that certain days of the year could pull a bereaved person down into a quicksand-like spiral as the memory of the past rubs salt into the still-wounded present. Holidays and anniversaries magnify the loss of a loved one, each event having the potential to drag under the people left behind. As a new Christmas season approached, I hoped that during the second anniversary of my baby girl Megan’s birth and death, I would resist both fighting the pull of grief and trying to speed through this potentially heartbreaking time. For as a victim in quicksand soon learns, both thrashing around and trying to rush through it could result in more loss. Continuing to fight causes the quicksand victim to further sink, just as I could further sink into my grief and self pity. Panicking and trying to speed the process of escape causes the victim to sink faster, just as I could push myself further into the pit of despair by not taking my time to acknowledge and face my grieving.

The Key with both quicksand and with grief is to move slowly, take small steps, and be willing to let others pull you out. 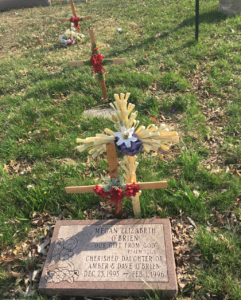 Two years before, I gave birth to a premature baby girl on December 23. The most intense forty days of my life followed her emergency birth as my husband and I watched our baby girl go on and off a respirator and survive bowel surgery, only to watch her take her final breath in my arms. Megan weighed just 2 pounds 4 ounces, but she was perfectly formed, a true gift from God. As she struggled for her life, we struggled against two major snowstorms to bring her my breast milk. I felt so torn between visiting the hospital and caring for my other two daughters, Mary Jo and Katie, at home.

As Megan took her final breath, however, I felt God’s complete peace and an awareness of his sovereignty. She shared forty days with us on earth, the number the early church fathers held as “the necessary period of cleansing or testing and strengthening which allows the fullness of wisdom to become a reality.” According to the Bible, Jesus spent forty hours in the tomb between good Friday and Easter morning, as well as forty days in the desert while being tempted. Noah and his family spent forty days on the ark. Moses fasted for forty days before he received the Ten Commandments, and the Israelites wandered for forty years before entering the Promised Land. Megan completed her forty days on earth and was now free from pain, praising God in her own Promised Land – Heaven.

The name Megan means “will achieve might and strength,” and I knew in my innermost depths her life was complete at forty days. While most days I could trust in God’s perfect wisdom for my family and me, as a sensitive and shortsighted human I still felt the loss of a loved one. Grieving is a healthy and necessary process whose emotions and tears should not be buried or ignored. I spent the following year writing in my journal and creating a scrap/photo album to include the photos, cards, and letters sent to commemorate Megan’s short life. A room was dedicated to her at my home church and Mary Jo, Katie, and I made frequent stops to hang bulletin boards and set up supplies. A year and a half later, a baby boy named Jacob blessed our family (Jacob means “the supplanter”). The waves of grief diminished as time and understanding increased. I turned to Jesus and His Holy Word for comfort and I felt my own faith strengthen. At times, I relished in the thought that I had a child in Heaven, for is that not our ultimate goal as parents?

However, as Christmas and Megan’s second birthday approached, my fears of how I would handle the days increased. Christmas was centered on a baby boy who was miraculously born. The absence of a miracle for Megan would seem greater with one less stocking to fill. On the other hand, if I filled a stocking as some bereaved parents do, I have one less child to unpack all the goodies. The sore empty wound that I still carried (and will always carry in a lesser degree until I am reunited with my baby) seemed such a contrast to the cheery hustle and bustle of Christmas. What could I do instead of planning her birthday party? What could I buy instead of party favors, cake and ice cream? Would anyone but me remember Megan’s birthday?

Christmas surrounded me with its cinnamon smells, jingle bells, glitter and gold tinsel. Could it have been only two years before, alone in my cold sterile hospital room that I spent Christmas morning? I was supposed to be six months pregnant, I thought. Instead, my little baby girl struggled for life in intensive care. My staples stung from the emergency cesarean, a physical reminder of the stinging feeling of sitting alone in a hospital bed trying to imagine the reactions of my girls as they opened their gifts at home. Two years later, especially during anniversary remembrances, the sore emptiness of loss was ever present and I feared I would sink into the quicksand of self-pity and depression. “Lord, I can’t let Megan’s birthday take away the peace and Joy of Christmas from my other children. Help.”

The Sunday before Christmas, we stopped by Megan’s grave after church. Before I opened the car door, I spotted something lying on her tombstone. I burst into tears of joy as I realized someone had left a tiny Christmas tree in Megan’s memory. Little ornaments of angels, Mary and Joseph, adorned the little tree. Attached was a card inside a plastic bag. Who could have been so kind? Who remembered Megan? With trembling hands, I ripped open the bag. As I read the card, my questions melted into understanding. Of course –  It was from Irene and Rich, friends of ours who had lost their own baby a year before mine to SIDS. “Merry Christmas, Megan,” the card read.  “Keep an extra eye out on your Mommy and Daddy, Mary Jo, Katie and Jacob this Christmas. You are forever in their hearts.”

I felt God’s love through the gift of that tree. As I thought about how Rich and Irene were able to comfort me because of their own loss, an idea sprouted. Now I had a plan as to how I was going to celebrate Megan’s birthday. My excitement grew as I planned our birthday surprise, and I no longer felt the quicksand pull of self-pity. On December 23rd, I bundled up my children and stopped first at a florist shop and selected a colorful bouquet with roses. 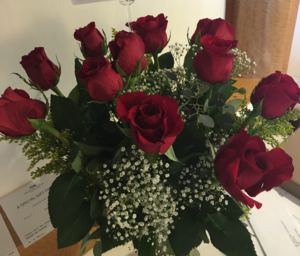 Next, we stopped at a local bookstore. I did not know the owners personally, but I had briefly met their preteen daughter before she died in a bicycling accident years before. She had watched my older daughter at church, and so five-year-old Mary Jo handed the father our bouquet. “What’s this?” he asked. I nodded to the picture of his daughter behind the cash register.  The words sputtered out and my eyes blinked back tears. “This is in memory of your daughter.”

Later that night, as I pulled into our driveway, I noticed a white rose with a note attached lying in our path. I recognized my friend Terry’s handwriting, but the message felt straight from heaven.  “Mommy, Thank you for giving me a ‘birth’ day.  Love, Megan.”

Tears of gratitude and release flowed. Like a balm for my wound, the tears flowed as I again felt God’s love and understanding through a friend. More ideas began to spring up as if my tears provided the moisture necessary for germination. Many neighbors, relatives and  friends were approaching quicksand pools of their own, and I hoped to help pull some of them out. The strongest pull is love, I will tell them, and the only escape from a pool of quicksand is to receive God’s love and then to love-pull a friend out of their own.